An open letter in defense of democracy — November 2, 2021

An open letter in defense of democracy

An open letter in defense of democracy |

From the left, the right and in between, we writers, academics and activists are joining together to defend liberal democracy and confront the danger facing America.

We are writers, academics, and political activists who have long disagreed about many things.

Some of us are Democrats and others Republicans. Some identify with the left, some with the right, and some with neither. We have disagreed in the past, and we hope to be able to disagree, productively, for years to come. Because we believe in the pluralism that is at the heart of democracy.

But right now we agree on a fundamental point: We need to join together to defend liberal democracy.

The primary source of this danger is one of our two major national parties, the Republican Party, which remains under the sway of Donald Trump and Trumpist authoritarianism. Unimpeded by Trump’s defeat in 2020 and unfazed by the January 6 insurrection, Trump and his supporters actively work to exploit anxieties and prejudices, to promote reckless hostility to the truth and to Americans who disagree with them, and to discredit the very practice of free and fair elections in which winners and losers respect the peaceful transfer of power.

Charities for the rich do donate

just not to the needy.http://www.tampabay.com/

Together, You Can Redeem the Soul of Our Nation

While my time here has now come to an end, I want you to know that in the last days and hours of my life you inspired me. You filled me with hope about the next chapter of the great American story when you used your power to make a difference in our society. Millions of people motivated simply by human compassion laid down the burdens of division. Around the country and the world you set aside race, class, age, language and nationality to demand respect for human dignity.

That is why I had to visit Black Lives Matter Plaza in Washington, though I was admitted to the hospital the following day. I just had to see and feel it for myself that, after many years of silent witness, the truth is still marching on.

Emmett Till was my George Floyd. He was my Rayshard Brooks, Sandra Bland and Breonna Taylor. He was 14 when he was killed, and I was only 15 years old at the time. I will never ever forget the moment when it became so clear that he could easily have been me. In those days, fear constrained us like an imaginary prison, and troubling thoughts of potential brutality committed for no understandable reason were the bars.

Like so many young people today, I was searching for a way out, or some might say a way in, and then I heard the voice of Dr. Martin Luther King Jr. on an old radio. He was talking about the philosophy and discipline of nonviolence. He said we are all complicit when we tolerate injustice. He said it is not enough to say it will get better by and by. He said each of us has a moral obligation to stand up, speak up and speak out. When you see something that is not right, you must say something. You must do something. Democracy is not a state. It is an act, and each generation must do its part to help build what we called the Beloved Community, a nation and world society at peace with itself.

Ordinary people with extraordinary vision can redeem the soul of America by getting in what I call good trouble, necessary trouble. Voting and participating in the democratic process are key. The vote is the most powerful nonviolent change agent you have in a democratic society. You must use it because it is not guaranteed. You can lose it.

You must also study and learn the lessons of history because humanity has been involved in this soul-wrenching, existential struggle for a very long time. People on every continent have stood in your shoes, through decades and centuries before you. The truth does not change, and that is why the answers worked out long ago can help you find solutions to the challenges of our time. Continue to build union between movements stretching across the globe because we must put away our willingness to profit from the exploitation of others.

Though I may not be here with you, I urge you to answer the highest calling of your heart and stand up for what you truly believe. In my life I have done all I can to demonstrate that the way of peace, the way of love and nonviolence is the more excellent way. Now it is your turn to let freedom ring.

When historians pick up their pens to write the story of the 21st century, let them say that it was your generation who laid down the heavy burdens of hate at last and that peace finally triumphed over violence, aggression and war. So I say to you, walk with the wind, brothers and sisters, and let the spirit of peace and the power of everlasting love be your guide.

Read more about civil rights leader John Lewis and his legacy
Opinion | Kathleen Kingsbury
‘Democracy Is Not a State. It Is an Act.’
July 30, 2020 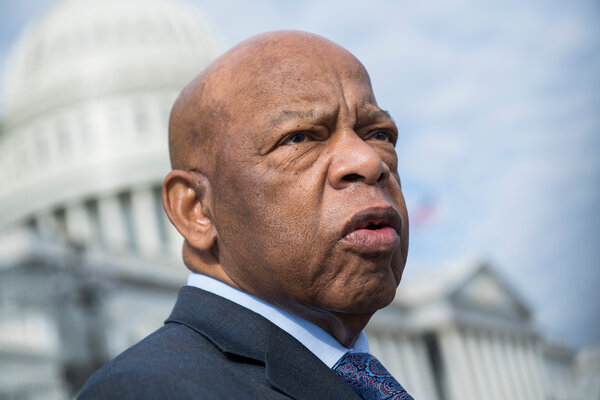 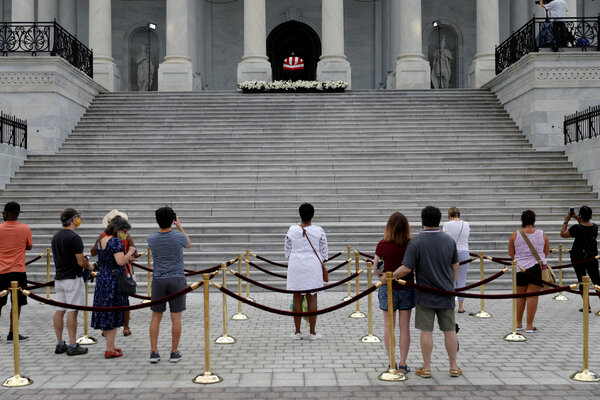 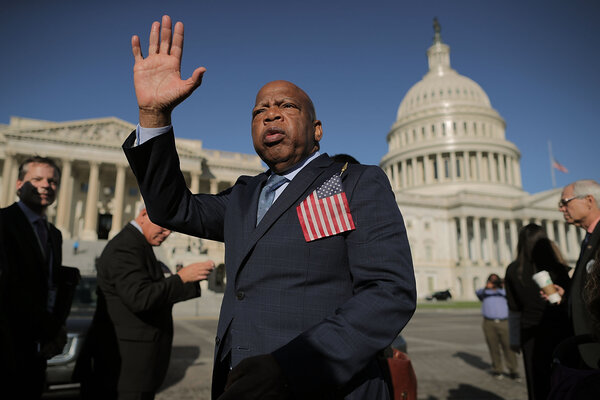 Opinion | The Editorial Board
John Lewis Risked His Life for Justice
July 17, 2020 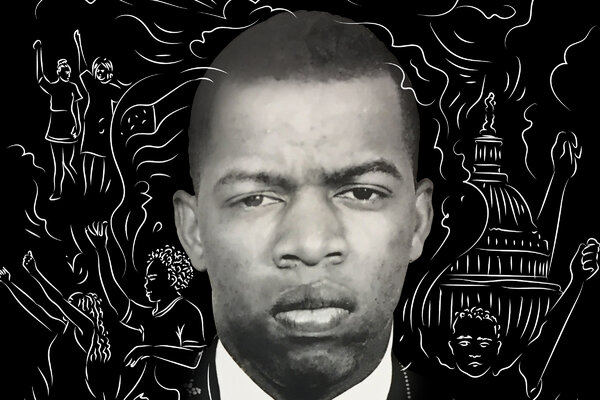 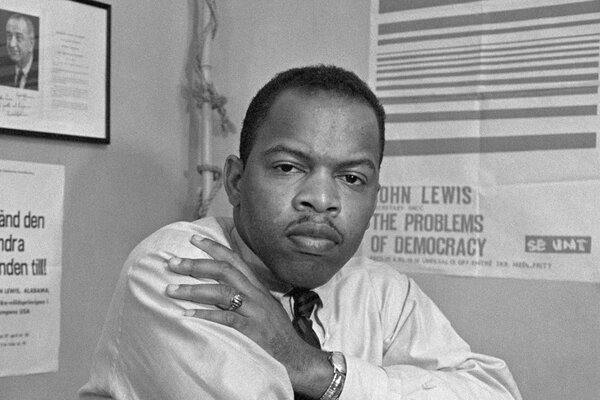 Sperm donations from dead men should be allowed, study says

Sperm donations taken from men after they have died should be allowed, a study says.

The analysis, which is published in the Journal of Medical Ethics, claims that opt-in post-death donations could be a “morally permissible” way of increasing the stocks available.

However, there is a growing shortage of donations around the country because of strict regulations.

Sperm can be collected after death either through electrical stimulation of the prostate gland or surgery, and can then be frozen.

Evidence suggests that sperm harvested from men who have died can still result in viable pregnancies and healthy children, even when retrieved up to 48 hours after death has occurred.

You watch TV and your TV watches back
BY GEOFFREY A. FOWLER

Wrapped in a Snuggie, I like to binge on reruns of The Golden Girls all by myself. Except I’m not really alone.

Once every few minutes, my television beams out a report about what’s on my screen to Samsung, the company that made it. Chances are, your TV is watching you, too, through a few nosy pixels on the screen.

Ever wondered why TV sets are getting so cheap? Manufacturing efficiency plays a role. But to paraphrase James Carville, it’s the data, stupid. TVs have joined the ranks of websites, apps and credit cards in the lucrative business of harvesting and sharing your information. Americans spend an average of 3 ½ hours in front of a TV each day, according to eMarketer. Your TV records may not contain sensitive search queries or financial data, but that history is a window to your interests, personality, joys and embarrassments.

They’re grabbing it because, legally speaking, tens of millions of us gave our permission.

END_OF_DOCUMENT_TOKEN_TO_BE_REPLACED

From The New York Times:

The Times’s staff critics give their choices of the best fiction and nonfiction works of the year. 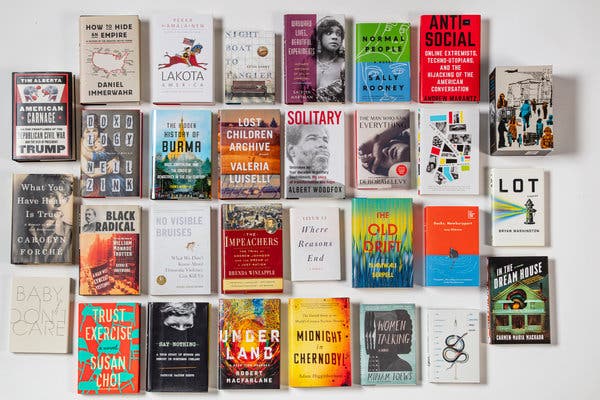 In the literary world, it has been a year of big, bold ambition. Novelists have stretched their canvases — writing a sentence that runs for a thousand pages; charting the fate of three families in Africa across four generations. Nonfiction writers have made riveting narrative from sprawling, difficult material: The Irish Troubles, the nuclear disaster at Chernobyl, the history of the Lakota tribe. And memoirists have confronted harrowing and profound subjects: Life in New Orleans during and after Hurricane Katrina; decades spent in solitary confinement; psychological abuse in intimate relationships. Below, The New York Times’s three daily book critics — Dwight Garner, Parul Sehgal and Jennifer Szalai — share their thoughts about their favorites among the books they reviewed this year, each list alphabetical by author.
An annual note on methodology: The critics limit themselves in making these lists, each selecting only from those books they reviewed for The Times. END_OF_DOCUMENT_TOKEN_TO_BE_REPLACED

“As pressure to build dams intensifies in less developed countries,

the opposite is happening in the United States and western Europe, where there’s a movement to tear down dams considered obsolete and enviroonmentally destructive.”

Follow the link below to view the article.
https://tampabaytimes-fl.newsmemory.com/?publink=078756cca_13411a3