From The New York Times:

The Boeing jet that crashed twice in five months relied on decades-old systems and left pilots without some common safety features. 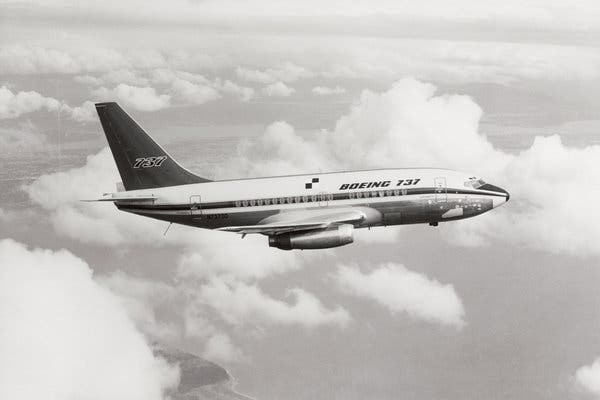 By Jack Nicas and Julie Creswell

The Boeing 737 Max, the newest passenger jet on the market, works differently. Pilots follow roughly the same seven steps used on the first 737 nearly 52 years ago: Shut off the cabin’s air-conditioning, redirect the air flow, switch on the engine, start the flow of fuel, revert the air flow, turn back on the air conditioning, and turn on a generator.

The 737 Max is a legacy of its past, built on decades-old systems, many that date back to the original version. The strategy, to keep updating the plane rather than starting from scratch, offered competitive advantages. Pilots were comfortable flying it, while airlines didn’t have to invest in costly new training for their pilots and mechanics. For Boeing, it was also faster and cheaper to redesign and recertify than starting anew.

I was in West Berlin the day the wall was opened.

Before crossing through Check Point Charlie, I was there with a hammer breaking chips of painted concrete to bring back as gifts to friends in New York. Hours before the wall was to be opened I tried to escape into West Berlin through a hole that was still being manned by the East German guards. I was denied that exit.  I had to return  to Check Point Charlie to legally exit East Germany. I returned many years later to see the remnants of the wall.  The Brandenburg Gate is now not as impressive as it was the last time I saw it in 1989.

Is the Berlin Wall the only that accomplished its goal?

Muslim Woman Made Up Hate Crime on Subway, Police Say

DNAinfo reported that she recanted the story on Tuesday and had made it up to get attention because of problems she was having with her family.

Like Loading...
Gun ownership is both a basic American right and one of the most contentious social and political issues of the day. — December 5, 2015

Gun ownership is both a basic American right and one of the most contentious social and political issues of the day.

Let me tell you a  fairy tale about a Pakistani girl who emigrated to Saudi Arabia with her father.  Years later she finds her Prince Charming, an American, marries him.  She gives birth to a child in the United States of America.  Let’s assume the Prince is the father and let’s not ask Maury Povich to do a paternity test on his show.  Couple lives happily ever after. The end.  No.  Not quite like that.  Six months later the baby is an orphan.  The couple, leave their six-month-old baby daughter with relatives, two hours later the couple is killed in a shootout with police SWAT team members.

End the Gun Epidemic in America

It is a moral outrage and national disgrace that civilians can legally purchase weapons designed to kill people with brutal speed and efficiency.

All decent people feel sorrow and righteous fury about the latest slaughter of innocents, in California. Law enforcement and intelligence agencies are searching for motivations, including the vital question of how the murderers might have been connected to international terrorism. That is right and proper.

But motives do not matter to the dead in California, nor did they in Colorado, Oregon, South Carolina, Virginia, Connecticut and far too many other places. The attention and anger of Americans should also be directed at the elected leaders whose job is to keep us safe but who place a higher premium on the money and political power of an industry dedicated to profiting from the unfettered spread of ever more powerful firearms.

I’m in favor of not restricting responsible people from owning guns.  I have yet to see a gun kill anyone.  There is always a human behind the weapon who does the killing.  The gun is an instrument that needs to be issued with caution to people.  I believe we need a National Identity card where all information about an individual is available to the authorities who will decide if an individual is a candidate for gun ownership.  There should be a waiting period where the individual should attend mandatory safety classes.  If the individual fails to pass these classes  he loses the right to ownership and must forfeit all fees paid.

END_OF_DOCUMENT_TOKEN_TO_BE_REPLACED

“No right is unlimited and immune from reasonable regulation.”

The New York Times is running an editorial on its front page on Saturday, the first time the paper has done so since 1920, calling for greater regulation on guns in the aftermath of a spate of mass shootings.

The editorial, headlined “The Gun Epidemic,” describes it as “a moral outrage and a national disgrace that people can legally purchase weapons designed specifically to kill with brutal speed and efficiency.” It suggests drastically reducing the number of firearms, and “eliminating some large categories of weapons and ammunition.”

“It is not necessary to debate the peculiar wording of the Second Amendment,” it reads. “No right is unlimited and immune from reasonable regulation.” END_OF_DOCUMENT_TOKEN_TO_BE_REPLACED

“It’s fun to kind of be the old guy and sit back here and see where the next generation takes this great institution,” Mr. Leno said about his successor, Jimmy Fallon. More gamely than convincingly, he added, “But it really is time to go and hand it off to the next guy, it really is.”